It is 75 years to the day since Auschwitz and Birkenau were abandoned by the Germans and liberated by the Soviets. The liberation was no celebration though. Conditions were so horrifying the film crew and photographers with the Soviets chose not to capture the moment. The footage available today, was filmed months later during a reenactment. Most rescued prisoners never made it home. The Soviets were ill prepared and didn’t have the means to feed, treat and shelter most of the prisoners.

In September, on Rosh Hashanah, I had the opportunity to visit both camps.  I’m copying my notes from that day to this little used blog, to have a more permanent home for them.

We visited Auschwitz and Birkenau today. The fact that today is Rosh Hashanah was purely coincidental, poignant and weirdly ignored. The weather was blustery with rain and ominous clouds which made the whole experience more surreal.

– To this point much of the WW2 history we experienced in Poland had a tragic, but heroic angle: the Warsaw uprisings, the underground resistance, stories of brigades of the Polish Army becoming guerrilla fighters, etc. With Auschwitz and the neighboring camps, once you were there it was futile. Death was immediate, or on the very near horizon.

– These camps were the best kept secret of the war. The camps in Poland existed from 1939 through 1944. Jews, prisoners, Romani, etc. walked into the camps and gas chambers all the way to the last days of the war without knowing what was to become of them. Churchill and Roosevelt didn’t believe their intel or chose to ignore it.

– The Soviets liberated what was left of the prisoners — most were slaughtered or forced to march to Germany, as the Nazi’s retreated. The story is mixed on how they responded. They kept the camps a secret for months. Despite having film crews deployed with the troops, the only film they released were reenactments of brave Russian soldiers freeing healthy and grateful prisoners and the prisoners celebrating with the soldiers. These films were shot 2-3 months after the Soviet forces arrived at the camp. In reality, the Soviets weren’t equipped to deal with that many people in the middle of January, and many continued to die as they had no place to go.

– The efficiency that the Nazi’s operated with is eye-opening. From the supply chain approach to acquiring and moving prisoners to the time management techniques used. On average, it took less than three hours to process, strip all possessions, gas and incinerate.

– It’s the high-holiday, but there is no sign or acknowledgement at the camps, the local museums and very little acknowledgement in the city of Krakow. We’ve seen one poster for a Rosh Hashana disco party tonight, and a small notice on one of the synagogues about the New Year’s service. In that way the Nazi’s were effective. They killed Jewish culture in central Europe. The few that survived didn’t want to return home or couldn’t as local families took over their homes and businesses. Those that still live in Poland keep a fairly low profile.

– The propaganda of the Nazis, the local compliant populace and of the Soviets was scarily similar to what we hear now from the Proud Boys and other nationalistic groups. 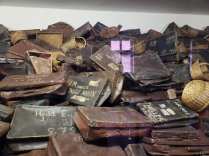 ← Greta Thnacks! Pam Edstrom
Agency Learnings from the Corporate Side →